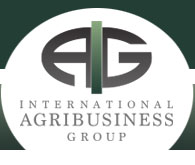 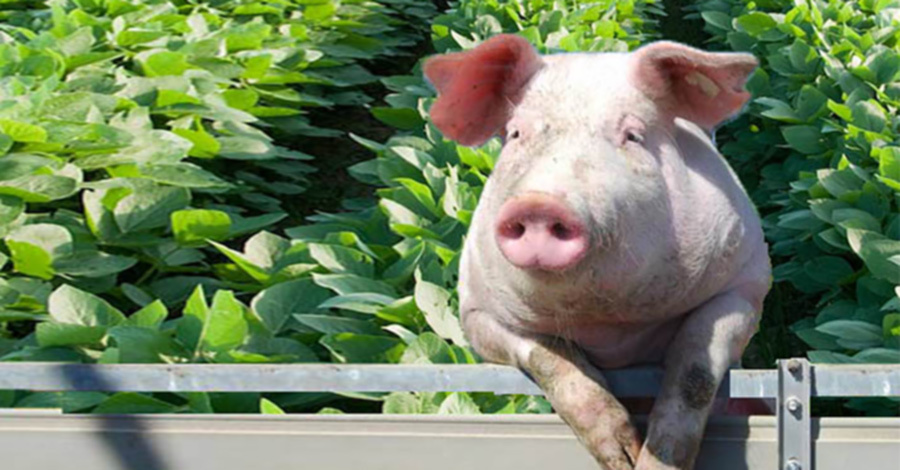 ASF = The Biggest Threat to World Animal Agriculture in 2019, and Beyond

If you wanted to create the highest negative impact to world animal agriculture, with the least effort, Chinese pork would be your target. It seems African Swine Fever, knowingly or not, has made that decision.

Quantifying the impact of ASF in China is a wild guess at best. Rather than estimate the actual loss of pork, we can utilize another method to begin to understand the potential impact. The alternative method simply asks: "what is the minimum loss of Chinese pork production required to be a major disruptor to pork and oilseed markets?" We will leave corn out of the discussion due to the lack of Chinese participation in world corn markets, and the lack of transparency in the Chinese corn stocks. We will also leave other pork producing areas out of the discussion even though ASF has impacts outside of China.

Let's start with the data. We all know Chinese pork production is huge, but how huge?

Total world production is around 111 million metric tons, but only 8.4 MMT (8%) trades. Very little is available for import. 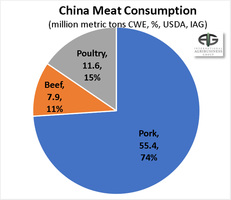 Pork prices have already responded. It is only the beginning. Producers and consumers will adjust to higher prices. We estimate production capacity, X China, can be pushed by about three percent which equates to no more than 1.5 MMT. Production expansion is limited by building space and breeding herd. The Chinese consumer has already begun adjusting. We estimate by substituting other proteins it is possible they could reduce pork consumption by 10% = 5.6 MMT. Ten percent is on the high side of what we expect. The auxiliary impact is then to greater beef and more significantly poultry demand. It is also hard to calculate a 10% substitution when there are no "extra" breasts, drumsticks, or steaks. The result is, anything over a 10% loss of Chinese pork production will put all meat proteins into a bidding war. Losing 10% of the Chinese supply sets the world back to 2012 supply levels, losing 20% sets the world all the way back to 1994 supply levels. We are already over the 10% threshold. The bidding war will be largely staged between China, the EU, the US, Japan, Mexico, Brazil, Canada, and South Korea. China has the greatest need, and they have cash.

Buildings can be constructed quickly, replacing the animals is slower. In order to build a herd, it is required to hold back females to breed and produce more piglets. Holding back a larger number of animals to breed reduces the animals that are fed for meat. The long‐term solution amplifies the short‐term problem.

In the past, disease issues have had a shorter shelf life than expected and I guess this will be the case here as well. The economic impact to China creates a huge incentive to rebuild the pork production. Consumers and producers will respond, but it is difficult to create a scenario where the protein shortage is eliminated in less than a year and it is feasible it remains over 18 months. This is a very rough estimate, new ASF cases are still being reported. The price impact will end long before the pork supply is restored. Restoring the pork supply will likely take three years or more.

Disclaimer: take off all short‐term price limitations if ASF is found in the EU or the US.

Beyond meat protein there are other sources of protein that must be considered. ASF and any other issue – animal rights, PEDv, Bird Flu, etc. ‐ that raises the cost of animal protein creates an opportunity for any non‐meat protein. Higher meat protein values allow plant, and synthetic proteins to gain another foot hold. Animal protein alternatives are already challenging traditional proteins for a piece of the plate. There is little precedent, but the availability of alternative proteins is one of the reasons we believe the price issue created by ASF issue has a shorter than expected shelf life.

Alternative proteins are still good for the US crop farmer. The US has the most productive crop land in the world.

Forget about trade issues, the impact of ASF circumvents any trade pact. We can measure the impact to oilseed prices using the same method we used for pork – where is the tipping point? The tipping point has already been breached. All that was needed to reach the tipping point was for soy demand growth to slow down. We can do the analysis by looking at soybeans. A year ago, world demand for soy was growing faster than we could add acres. End stocks were shrinking, even with US and Brazilian soy production expanding. China was 50‐60% of the demand growth. The demand growth outside of China remains, but so does the production growth, mainly in Brazil. Last spring soybeans were bidding acres away from grains, today soybeans are offering those acres back and corn is reluctantly accepting. Barring weather issues, regardless of how we allocate the acres, we will grow too much of something. Inventories of grain, oilseeds, or cotton will grow. The slow down created by tariffs can be remedied with a few pixels in a tweet. We do not have a complete remedy for ASF – it is apolitical. (A truly rare phenomenon today) Unfortunately, the trade deal has put the soy producer in a negative position that can not be quickly remedied. The tariffs created a huge pile of unused soybeans just before we were about to lose critical demand.

The soy demand will come back, based on our projections by late 2020. In the meantime, the US farmer and US merchants are stuck being patriots, battling a trade war, holding on to massive soybean inventories, and trying to sell soybeans to farmers whose pigs are dying.